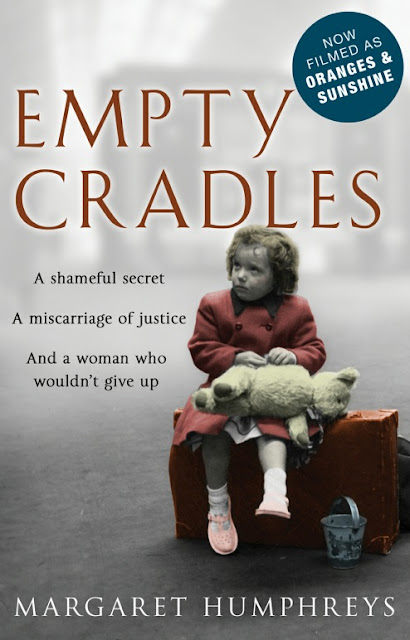 I just finished reading this book and I dont want people to miss out on reading about it - so I am adding it as an extra bonus.

2 weeks ago I watched the movie Oranges and Sunshine on Netflix. I have now just finished reading the book.  It is a biopic about one social worker from England who opens a huge can of worms (and a human rights disaster) when she innocently starts asking why children were sent from the UK to various colonies both before and after World War 2.

While I had heard of the Home children before, I was not aware of how widespread the problem was, nor how poorly the children were treated.

I also empathized with these children (now adults) who had been dumped in Australia as children with no identity and in most cases they were outright lied to. As adults they had a lot of difficulty proving their identity since there were no records of them ever being born in Australia or immigrating to Australia legally.

Many of these children has been placed in the orphanages or into foster care temporarily just to allow the mother to get back on her feet. Most of these mothers had lost their spouses in the war and had trouble coping with little or no support. Most of these mothers also had NO legal recourse in demanding that their children NOT be adopted out.They were told that their child or children would be perfectly safe until she was ready to pick them up and be a family again.

In the 1980s Margaret Humphreys was a social worker from Nottingham in England. She was running a support group for adult adopted children who were attempting to find their birth parents and siblings.

One day Margaret was told by one of the adult adoptees in her support group that she had remembered that she had had a brother so she had sent a letter off to the Salvation army asking for details. Eventually she received a reply from a man in Australia who said he was her brother. By the time they met, this woman (Marie) and her husband had met the brother (Harold) in Australia and the two men clearly did not get along.

Margaret asked Marie, how did her brother get to Australia?
He was put on a boat.
With your parents? Margaret asked.
No. On his own.


Around the same time Margaret also received a letter from another woman in Australia who had heard about the adopted adult support group in Nottingham and was asking if Margaret could help her. She too was put on a boat when she was 4 years old and sent to Australia. The only thing she knew for sure was that she was born in Nottingham.

These two coincidences opened a huge can of worms for Margaret and the repercussions can still be felt today.

With these two ladies asking the first questions, Margaret began searching for answers at St Catherines House in London. In the 1980s St Catherines held all the BMD records and archives. [BMD = Births, Marriages and Deaths]. She found the birth registration for the Australian woman born in Nottingham. Then Margaret went looking for the marriage record of the parents. She eventually found the marriage record dated AFTER the Australian woman  had been sent to Australia. Just remember that in the 1980s, there were no genealogical online databases like there are today.

Margaret flew out to Australia and began asking questions. The horror stories she uncovered are just horrendous. The children were aged anywhere from 4 to 14. Most of them were sent out from orphanages and told that their parents had died. Once they arrived in Australia they were supposed to be fostered or adopted out, but that seldom happened. Most of the children were sent to childrens homes and orphanages and put to work as unpaid labourers or slaves.

Since Australia is a very hot country in the summer, many of these children had difficulty adjusting to the hot weather and to the change of seasons. Xmas in Australia occurs in the summer and NOT in the winter.

Altogether more than 100,000 children were sent from the UK to Australia from the 1940s up until the mid 1960s. Those children lost all contact with their families. When they began asking questions, Margaret spent much of her time searching through BMD records. Some of these children were too late to meet their parents. Others had cautious reunions.

In Australia Margaret soon began receiving death threats. Noone in the UK believed her, but I think most of these threats came from the Catholic church since many of the childrens homes were run by that church. And of course that church could not have people learn that they were treating these children as slave labour. That would be bad. It didn't help that the pedophile priests scandal also erupted around the same time as well - the 1980s.

If you can watch the movie Oranges and Sunshine, please do so. I think it is very realistic and very emotional.


As I said at the beginning of this review, the reason I could empathize with these children and this story is because my mother was adopted as a child and raised by very strict adoptive parents. She had no clue as to her real identity. In fact she did not even know she was adopted until after her adoptive mother died when I was a teenager. THAT is when she discovered that she was adopted. My mother was devastated. She had frequently spoken of her very strict parents while I was growing up.

As  soon as I understood that her family were NOT MY family, I lost all interest in her family and her stories. At that time there was no legal recourse to obtaining ones legal birth certificate, but several years later the laws were passed to allow adult children to obtain their original birth certificates.

By this time I had developed a enthusiasm for History and Genealogy. From the time the law was passed, my mother dragged her feet and took 10 years before she finally gave in to my constant nagging, and obtained her birth certificate.

Unfortunately my mothers father is NOT named on her original birth certificate, so that part of my ancestry is pretty much still lost to me. But at least I have her maternal ancestry.

Posted by Francesca Thomas at 6:17 PM

Francesca Thomas
I love books, I love reading them, I love owning them. I love History and Maps, Genealogy, Archaeology, and Sci Fi (Star Trek & Stargate) and Biographies.